Lagrange: The Flower of Rin-ne Wiki
Register
Don't have an account?
Sign In
Advertisement
in: Characters, Aliens

An Ovid pilot who transfers in Madoka's class and joins the Jersey Club. Although she appears to have a slow-witted personality, she is actually sharp and perceptive. She will occasionally say "Understood" (かしこまり〜 Kashikomari~). Born on a Prison Planet, she views Villagiulio as an older brother and by his orders, she infiltrated the Pharos base to steal one of the Ovids, thus she ends up becoming the pilot of Vox Ignis, which she nicknamed Hupo. After being betrayed and abandoned by Villagiulio, Muginami finds herself a new place among Madoka and her friends. After Villagiulio's second skirmish, she and her Vox took him and retreated into space. She returns in Season 2 where, after realizing she doesn't want to fight those she loves, rejoins the Jersey Club. Hupo is now equipped with a energy cape she uses as a shield.

Muginami appears ditzy and dense at times, but she possesses a great intellect and sharp wit. She demonstrates this often when she teases her close friend Lan. Despite Muginami and Lan getting off to a rocky start (due to their home planet's politics) the two learn to overcome this as they find their friendship more valuable than their alliance to their planets. Muginami joins the Jersey club first in season 1 due to her quick friendship with Madoka, Lan follows soon after due to original mistrust of Muginami. Even though Muginami joins the Jersey club first, it is shown that her alliance was more geared towards her 'brother' Villagiulio. But after he betrayed and abandoned her, Muginami's alliance makes a shift towards Madoka and Lan. Since then her friendship towards Lan and Madoka has been very strong in both season 1 and 2. She is a proud member of the Jersey club and reflects the same Jersey club spirit as Madoka and Lan. She is the more teasing and playful of the trio going so far as to call Lan her favorite "CPR dummy".

Muginami is skilled at hand to hand combat, lifeguarding, and waitressing on occasion.

She is experienced at performing CPR as shown during episode 4 when administering on Lan who couldn't swim, such as starting off with five hard chest compressions by pumping the sternum area, followed by tilting her head back to pinch her nose and give her two deep rescue breaths, repeating this cycle until she is revived.

Muginami pilots the orange Vox Hupo (originally a cause of tension between Muginami and Villagiulio) She picked up on piloting both modes on the Vox faster than Lan managed to do. 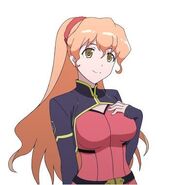 Cover art for Volume 3 of the Character CDs, featuring Muginami
Community content is available under CC-BY-SA unless otherwise noted.
Advertisement